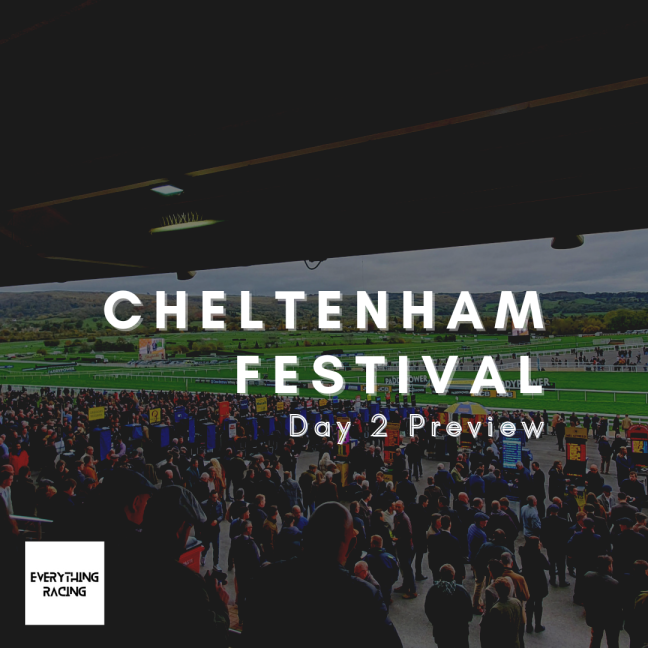 Day Two of The Festival kicks off at 1:30 with the Ballymore Novices’ Hurdle which is a Grade 1 event that’s contested over a distance of two miles and five furlongs. Some top-drawer hurdlers have won this race over the years and I think another one could claim this year’s renewal in the form of Sir Gerhard at skinny odds of 4/6 for Willie Mullins and Paul Townend. Winner of the Champion Bumper at last year’s Festival he’s won both of his starts over obstacles to date including a Grade 1 last time out the Dublin Racing Festival, I think he’ll take all the beating. If you’re looking for one as an each-way alternative though the answer could be Journey With Me at 8/1 for Henry De Bromhead and Rachael Blackmore, he arrives here defending an unbeaten record and got the better of the smart Minella Crooner on his penultimate outing.

Next up at 2:10 is the Brown Advisory Novices’ Chase which is another Grade 1 event, this time over three miles and half of a furlong. I think this can go to Bravemansgame at 5/2 for Paul Nicholls and Harry Cobden. He’s got a few questions to answer at Cheltenham, with most of his success coming on flatter tracks and he got turned over in the Ballymore last year when finishing behind Bob Olinger, which is no disgrace. I think he’s got star quality about him though and is in the same mould of the yard’s former great Denman, who also won this race. His main rivals look to come in the form of L’Homme Presse and Ahoy Senor, the latter he got the better of at Christmas.

We move into handicap company at 2:50 with the Coral Cup taking centre stage over two miles and five furlongs. As is the case with most festival handicaps this is an extremely competitve affair, and as such I’ve sided with two in the line-up. Both owned by JP McManus, the first comes in the form of Camprond for Phillip Hobbs who’s currently a 17/2 chance under Aidan Coleman. He’s got course form having won here earlier in the season before running a big race in the Greatwood when last seen. I think he’s every chance of going well again here. The second one is Drop The Anchor who’s currently trading at 10/1 and is the mount of Simon Torrens. He’s not quite shown his best yet over this sort of distance but often finishes strongly over shorter, he’s still relatively unexposed and could also prove to be well handicapped.

The feature race of Day 2 is the Queen Mother Champion Chase which is set to take place at 3.30 over two miles. The looks all about Shishkin at 5/6 for Nicky Henderson and Nico De Boinville, a duo that enjoyed a great first day. He’s already got two festival wins to his name having won the Supreme and the Arkle and has looked better than ever this season, most recently beating Energumene in a stellar clash at Ascot. I haven’t actually punted him though, I’ve taken a chance on Chacun Pour Soi at 6/1 for Willie Mullins and Patrick Mullins. This is more heart than head if I’m being totally honest, but I’m still of the belief that we haven’t seen the best of him and if getting into a rhythm with his jumping he’s got more than enough ability to trouble any rival. He got back to winning ways last time out with a devastating success at the Dublin Racing Festival and I’d love to see him win this.

It’s the Cross Country next at 4:10 over three miles and six furlongs, which is one of the spectacles of the meeting. The returning hero Tiger Roll sets the standard here at the top of the betting and is the one they all have to beat, which is reflected in his short price. I’ve taken him on though and I’ve done that with Prengarde for Edna Bolger, who’s a 17/2 chance under Mark Walsh. He won a Listed Cross Country race when trained in France and is still only a six-year-old, which is rare for a race of this year. He has similarities to Easysland when he won the race a couple of years ago, and I think he’s got every chance of playing a part.

The penultimate race of the day comes at 4:50 and it’s the Grand Annual Chase over two miles. This is another extremely competitive affair of which a case can be made for most of them. I’ve taken a chance on the Venetia Williams trained Frero Banbou though at 14/1 who’s the mount of Charlie Deutsch. He’s a horse I’ve backed a few times this season, once here earlier in the season where he finished third behind Editeur Du Gite and after when he won at Lingfield. I think he’s still got some progression in him and he ran an eye-catching race last time out when finishing second at Sandown, if things fall right for him he could be involved at a nice price.

Concluding the day is the Champion Bumper at 5:30, a Grade 1 National Hunt Flat Race that takes place over two miles and half of a furlong. All the talk here has been about Facile Vega after his very impressive success at the Dublin Racing Festival, and if he turns up in that kind of form again for this assignment he’ll be tough to beat. I have actually gone against him though and sided with American Mike at 9/4 for Gordon Elliott and Jamie Codd. Connections have been bullish about this horses chances for this race for some time and have been very vocal in how highly they rate him. He was last seen when winning a Listed race by 17 lengths back in December and he looks to have a big future ahead of him, which he could well showcase in this event.