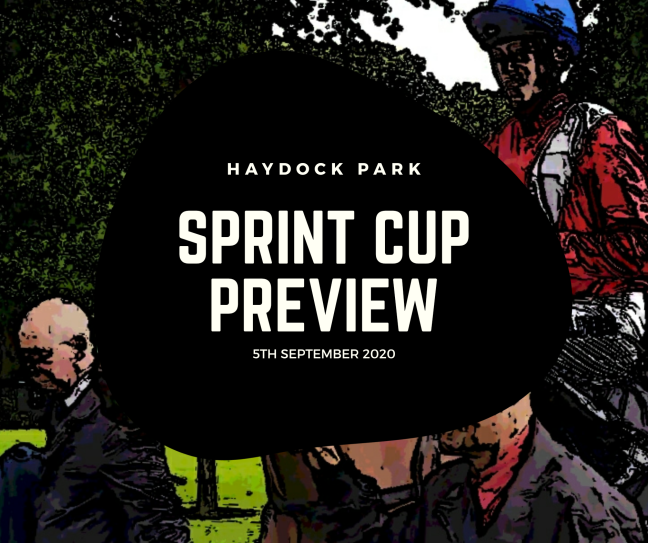 “A big welcome to this Preview where I’m taking a look at the feature event of the weekend which is the Sprint Cup at Haydock Park this Saturday. The site has been pretty quiet since the Ebor Festival with any punts being shared on the Facebook site. September got off to the best possible
start with a single tip going in at Hamilton on Tuesday when Lucky Lucky Man landed the punt at 7/2.

I’ll be previewing the Sprint Cup before sharing my verdict on the race and who I’ll be having a punt on. So, as ever, enjoy.” – Jordan

The Sprint Cup is one of the feature races of the flat calendar at Haydock Park, it’s a Group 1 contest over 6 furlongs and in recent years has been won by the likes of Harry Angel, The Tin Man and Quiet Reflection.

This year’s renewal of the race is headed by the Sir Michael Stoute trained Dream of Dreams who’s to be ridden by the champion jockey Oisin Murphy. Trading at a general 11/4 the six-year-old gelding by Dream Ahead was last seen when winning in emphatic style at Newbury when taking the Group 2 Hungerford Stakes by seven lengths. On his other outing this season he was narrowly denied in the Diamond Jubilee Stakes at Royal Ascot, when finishing second by a head. It was last year’s winner of this race Hello Youmzain that was his conqueror on that occasion at Ascot and he lines up again here in an attempt to retain his title. Since his Ascot won he went onto finish fifth in the July Cup at Newmarket and an impressive second behind Space Blues in a Group 1 in France. He’s trading at around 7/2 in the betting here and is once more reunited with rider with Kevin Stott.

Roger Teal looks set to send his July Cup hero Oxted to take his place here. He arrives here on the back of three straight victories which include the Group 3 Abernant Stakes earlier this year as well as his Group 1 success in the Newmarket feature. He’s currently trading at a best price of 4/1. Clive Cox is no stranger to success in this race and he’s represented by the talented Golden Horde who’s the mount of Adam Kirby,  winner of the Group 1 Commonwealth Cup this year at Royal Ascot, he’s since gone on to finish third in the July Cup and fifth in a Group 1 in France. Currently in the betting markets he’s around a 6/1 chance.

A horse that I’ve become a big fan of this season is the Tim Easterby trained Art Power who represents King Power Racing and is the mount of their retained rider Silvestre De Sousa. He was last seen when finishing a slightly underwhelming sixth of eight behind Battaash in the Group 1 Nunthorpe Stakes at York last month. Before that he’d won four on the spin including the Group 3 Lacken Stakes over in Ireland at Naas, beating Millisle by over two lengths. He’s around the 7/1 mark currently for this assignment. Sheikh Hamdan currently has two representatives in the field, the first of these comes in the form of the five-year-old Tabdeed who’s trained by Owen Burrows. He’s not got many miles on the clock for his age, however still seemingly retains a lot of ability, last seen winning the Group 3 Hackwood Stakes at Newbury when beating The Tin Man by half a length. He’s the choice of Jim Crowley here and is a 9/1 shot. The Charlie Hills trained Khaadem makes up the duo, he was actually favourite for this race twelve months ago but ended up finishing dead last, eleventh of eleven. He’s not quite managed to return to the form of his Stewards Cup win at Goodwood last year, but he has posted a couple of promising efforts this season when finishing fourth in both the July Cup and Diamond Jubilee Stakes. He’ll be ridden here by William Buick and is a general 14/1 chance.

Other notable runners in the field include the Aidan O’Brien challenger which is Lope Y Fernandez, in his last two outings in France he’s been placed in two Group 1’s behind Pinatubo and Space Blues and is currently a 7/1 shot for this particular assignment. Previous winner of the race The Tin Man is once again set to take his place, as is old favourite Brando.

Dream Of Dreams sets a solid standard here on the back of his very impressive win last time, and if turning up in that kind of form again here he’ll be very tough to beat. There’s a whole host of them at the top end of the betting that if turning up in their best form they could put in a big performance, these include the likes of Hello Youmzain, Oxted and Golden Horde.

I’ve actually had a couple of each-way punts a bit further down in the betting, the first of these is ART POWER. I think he’s a very talented horse and was let down by a poor break the last day at York and was always playing catch up, if bouncing back to form and continue the progression he’s been showing he’s every chance of playing a part within Group 1 company. The other horse I’ve had an each-way poke on is TABDEED for Owen Burrows. He’s very much the unexposed sort in the race and I’ve been a fan of his since seeing his impressive win at Ascot back in 2018. He’s had his troubles since then and hasn’t had much time on the track, but it’s clear on the back his Group 3 win the last day he retains a lot of ability and could have a lot more to offer.